Your story has had a large impact on my life. My whole family listened to it when I was very young, and we would always watch your movies together. I did have a harder time when it came to actually reading the books since I do not particularly like reading, since I have a hard time when it comes to reading because of my dyslexia, so I try to avoid reading if I can. But when I finally did push myself to read it, I could not put any of the books down. I feel in love with the with the world you lived in, even more than I already had with the movies. The spells, magical objects, Hogwarts, and most of all the people were all so complex and interesting to read. It was made pretty clear throughout the story who was the good guys and who was the bad guys. Even if a person was a bad guy, well it was still so interesting to read their stories and character arcs. But then that was all changed for one character in the last book. In the battle of Hogwarts, after Snape had died, we learn that he was actually a double agent for Dumbledore. So, our perspectives on Snape completely changed, and we are now made to believe that Snape was a good person all along. We are made to forget all of the horrible things he did in the past just because he was bullied and ended up doing something for the good side in the end. You even believe this, since you gave your second son the middle name “Severus”.

Now, hear me out. Yes, Snape did do something good, and he did have a rough childhood, so it is not bad to feel sorry for Snape. But Harry, rather than putting Snape on this pedestal and making him out to be a hero, and even going so far as to give his name to one of your children is not what Snape deserved for his actions. Yes, Snape did change to the good side and did help Dumbledore. But, how did he get to that point?

Snape was childhood friends with your mother Lily. They both cared about each other, but when they went to Hogwarts and were sorted into different houses, so they naturally started growing apart. Snape began to make friends with the wrong kind of people and started becoming interested in the dark arts and the death eaters causes. Lily tried to steer Snape in a better direction the best she could, but Snape refused to change his ways. So, things were not great between the two of them, and that was all Snape’s fault. But Lily didn’t decide to cut ties all together with Snape until their fifth year, after he called her a “mud blood”. After that day, Lily moved on, but Snape didn’t. Since it is told through Snape’s perspective, it is made to look, that Lily only got together with James to spite Snape. But, Harry, you must know that is not the case. Lily and James didn’t start dating until their last year, two whole years after Snape and Lily’s incident. James had time to get himself together, and stop acting like a jerk. Lily legitimately fell for James and moved on from Snape. But Snape never moved on from Lily. 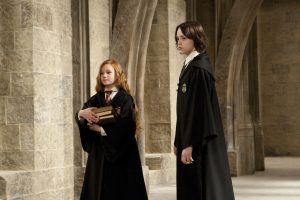 Now I don’t know if you just don’t remember this part, or you don’t want to remember it, but Snape was the one that told Voldemort about the prophesy. He apparently loved Lily so much, but it was okay with him that you, her son, and her husband were going to be killed, but when the mention of Lily being killed, he back tracks. He cared so much for her, but didn’t care about her happiness, that’s the exact opposite of love, and is not a good motivation for anything. The only reason Snape changed sides was to save Lily, a woman that he creepily is still “in love” with, not you or James, the people she loves. But because Dumbledore was the one Snape went to, trying to save you and James were a package deal. That was not Snape’s decision. If it were up to him, Lily would still be alive, and you and your father would be dead.

Then during your years at Hogwarts, Snape had the perfect opportunity to make amends with his past and finally move on. But instead he chose to torment you and anyone else who was not Slytherin. He constantly made fun of Hermione for her appreciation for school, and even laughed at her when her teeth wouldn’t stop growing in his class, instead of getting help. He tormented students so badly that Nevil’s worst fear is Snape. That is not a good person. Snape was a horrible teacher. Yes, it is reviled that Snape was looking after you in secret the whole time, and no one was to know. But he could have done that without tormenting you and making your time in his class a living nightmare. He didn’t do that to “keep his cover”, he did it to let his anger about your father, which is not right. 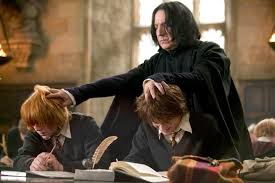 Now even after all of that, if you still think Snape’s motives were good and he deserves to be seen as a hero, I have news for you. I don’t know how it works in the wizarding world, but when someone commits a crime, even if their motivations are good, they are still held accountable for said crime. So, if you still think Snape’s motives were good for what he did, he still needs to be held accountable for all of the horrible things he did. That even through he did end up on the side of good, he did it by force. And before he was on the good side, he was a death eater, he killed people. Then, even when he was on the good side, he tormented students and treated them unfairly to the point of being their worst fear. That is not a hero.

Yes, Snape did a good thing. But just because someone does one good thing does not make them a good person, let alone a hero. I do hope you can now see that Harry. I’m not saying you should change Aldus’s middle name, but maybe consider it. Cause I honestly don’t think Snape would even want his name associated with the Potter’s bloodline. Just give what I have said a thought.